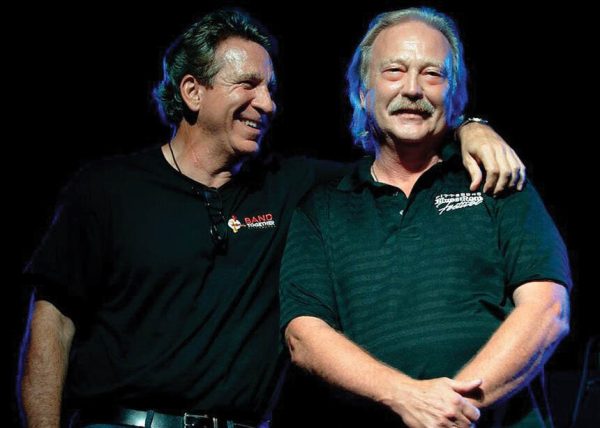 Band Together Pittsburgh believes that music has the power to unify the world.

We envision using music to inspire and enrich the lives of those on the autism spectrum, enabling integration with family, friends, and society as a whole.

Band Together Pittsburgh uses music as an instrument for change.

We provide innovative programming, experiences, and vocational opportunities to enhance the lives of those on the autism spectrum. 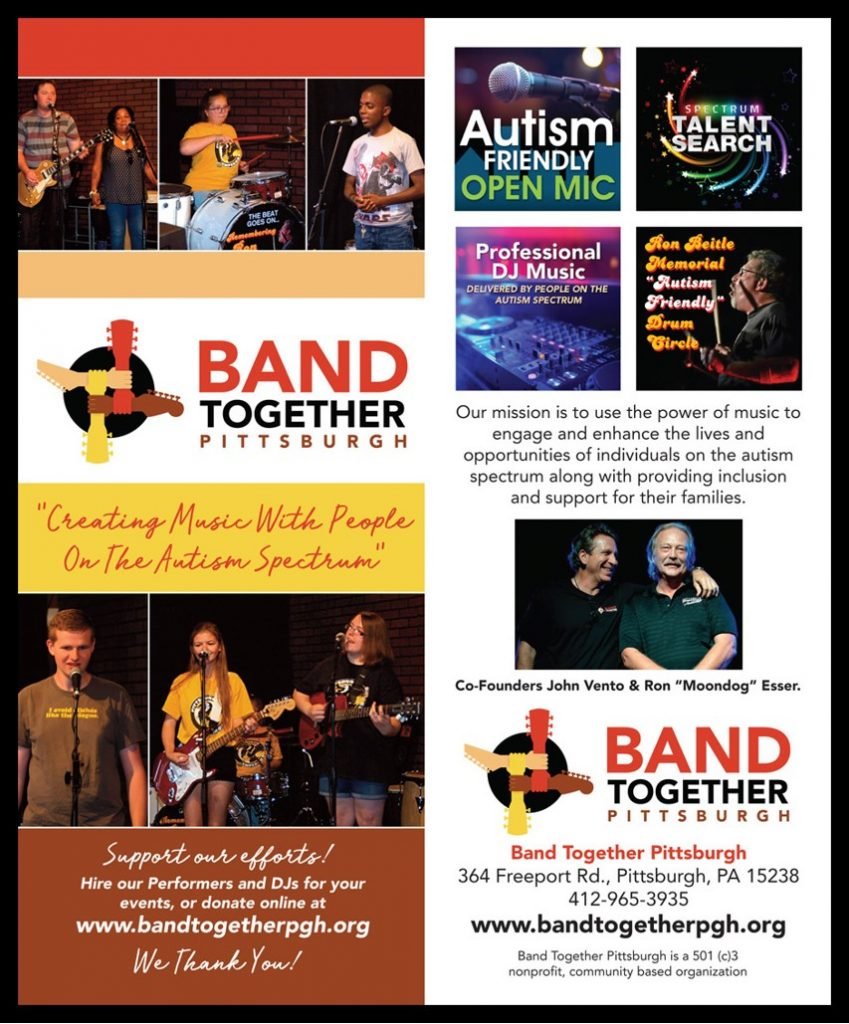 Greg currently serves as pastor of Trinity United Methodist Church, Brackenridge, PA. He also provides an online and outreach ministry (Way Stations Ministries.org) with his wife Christine. Greg, Chris and their eldest son Benjamin (Benj) were introduced to Band Together Pittsburgh, by Therese McShea. The warm welcome, acceptance, and opportunity offered to Benjamin (who is on the Autism Spectrum) immediately impressed and helped the family to belong. Soon Benj began singing, and playing his guitar at Open Mic events. Now Trinity Church and Way Stations Ministries are active in support and partnering with Band Together. Pastor Greg brings his pastoral skills and enthusiasm to Band Together, believing this “ministry” is an important way to bring healing, belonging and fulfillment to those on the Autism Spectrum and richer respect and inclusion for the whole community.

Therese has been assisting Band Together Pittsburgh with grant writing ever since she attended their very first Autism Friendly Open Mic back in 2017. She witnessed her nephew Tom and his peers on the spectrum blossom as they entertained live audiences onstage at a professional venue. The experience led her to volunteer wherever help was needed. She hopes to apply her public relations skills in the coming year to make Band Together more widely known and supported. Therese is a Medicare Broker and also has worked in Communications and Public Relations for 20 years. She is an avid volunteer for many charities and has a wonderful giving spirit.

Greg has helped many Pittsburgh area charities for the past thirty years. His long term connection with Ron ‘Moondog’ Esser and his love for music led to his involvement with Band Together Pittsburgh. His education from Franciscan University and Carnegie Mellon University additionally led him to becoming a senior advisor for Wright Associates. Greg lives in Mount Lebanon with his wife and daughter. Occasionally, he will sneak off to Siesta Key to enjoy the warm weather and sit on the beach.

Ellen has served as the Deputy Director Administrative Services for Allegheny County for 5 years. She and her husband have a special connection with autism. Soon after her son, Xavier, was born in 2002, they noticed developmental delays. At age three, they found out that his behavior around the other children was indicative of autism. After countless evaluations, Xavier was diagnosed with autism. They pivoted to plan on how to raise him with love, compassion, discipline and respect. They decided that his diagnosis was just that: a diagnosis – not a definition of who he was or who he would become. They are now the proud parents of an amazing young man who couldn’t speak sentences at three and graduated high school at 18 having successfully completed Honors Spanish. He’s now in college studying music technology. She believes Band Together Pittsburgh is the best program to help him grow in confidence and hone his craft.

Tony is the husband to his beloved wife Tammy, and father to two children: Justin, 28, and Angel, 20. Tony is a VP for PNC Mortgage and has spent over 30 years helping families achieve their financial goals. He enjoys music, golfing, fishing, sports and the Pittsburgh Steelers. He and his wife have a strong Christian faith which helps them deal with the daily challenges of life. Tony and Tammy have a special connection with children on the spectrum. Their son, Justin, was diagnosed with Autism about 25 years ago. At the time, very little was known about the diagnosis. They were told about 1 in 10,000 children were born with autism. Today, about 1 in 40 kids have autism. Even though his son has limited ability to vocalize his wants and needs- he lights up when he hears a favorite song. There is no question in Tony’s mind that Justin responds positively to music; that is why he is honored to help Band Together Pittsburgh reach children of all ages with the power of music.

John is a loving father of three, a successful Pittsburgh businessman, an introspective musician, and a gracious philanthropist. He helps to create many small businesses by supporting and mentoring young entrepreneurs, in addition to offering encouragement to new and veteran musicians. The front man for the high-energy Nied’s Hotel Band is also known for his brooding solo recordings. His passion for autism awareness is quite personal; his Godson and other family members are on the spectrum. This led to Ron ‘Moondog’ Esser, and Vento co-founding Band Together Pittsburgh. He features autism-friendly “open mic nights” at his Gibsonia-based event venue, Steamworks Creative. “We want folks to see how beautiful and talented those on the spectrum really are,” he says. “You would have to come to one of our Autism Friendly Open Mic events to see first-hand what I’m trying to say. It’s amazing on every level.”

Justin was diagnosed with autism in 2012, at the age of 17. It was a late, yet expected diagnosis that opened a world of opportunities. Autism isnt just part of his world, but is his world. His multidisciplinary exploration of music aggregates titles including singer-songwriter, music producer, live sound engineer, and DJ. He is a 2016 graduate of York College of Pennsylvania with a Bachelor of Science degree in Music with a focus in Music Industry and Recording Technology. As an individual on the autism spectrum himself, he serves Band Together Pittsburgh as a bridge to both the autistic mind and the world of music.

Ron has been a huge part of the Pittsburgh music scene for 30+ years. Ron owns Moondog’s and the Starlite Lounge in Blawnox, and he produced the Pittsburgh Blues Festival for more than 20 years. The Festival, during that period, netted over $2 million for charity. Moondog has also been awarded Volunteer Philanthropist of the Year by the Western PA Fundraising Professionals and he is a board member of the Autism Society of Pittsburgh.

Carol is a lecturer of business for Penn State University. She has also taught in the business, human resources, organizational leadership, advertising, and culinary degree programs for CCAC, BC3, Geneva College, Robert Morris University, and The former Art Institute of Pittsburgh. Carol had been an avid volunteer of the Pittsburgh Blues Festival 22 of it’s 25 years, serving wherever needed whether that was parking cars, checking IDs, selling merch, pouring beer, acting as security, manning the kid’s tent, taking surveys, or collecting food donations (did I leave anything out?). The end of that festival left a void…for Carol and the people of Pittsburgh! Music inspires! It heals! It sparks lifelong friendships! Band Together Pittsburgh is all about that and I’m thrilled to be involved!